Scott Greiper is the President and Founder of Viridian Capital Advisors, a New York based financial and strategic advisory firm dedicated to backing and building market leaders in the emerging cannabis sector.

Founder and owner of Starbuds

Brian is best known as the founder and owner of Starbuds, a chain of Colorado dispensaries. Brian left the practice of law to become a marijuana industry pioneer and is now considered a top industry leader. Brian owns marijuana businesses in multiple states including dispensaries, grows, extraction labs, and edible kitchens.

Joel has been at the helm of multiple successful start-ups and corporate exits, including one of BC’s top real estate teams and brokerage, a National first action sports e-commerce company, a successful corporate consulting firm, and a 36M dollar private equity fund focused on Arizona real estate development. With a background in Finance, Joel is also a seasoned Real Estate investor, found great success in the technology sector, and brings a wealth of hands-on entrepreneurial business experience.

Jamie Perino is the co-owner of Euflora located in Colorado with 3 recreational stores and 1 greenhouse grow facility. She has recently ventured out on her own and is opening another line of dispensaries and grows with the first set to open in March 2016 in Boulder, Colorado.
Her vision is to change the face of the industry while providing the highest quality product to the end consumer. Going green to her means not only being an advocate for the industry but also doing it in the safest, most environmentally friendly way possible.

His mission is to grow 130 acres of legal CBD in Colorado.

Pitching a Dispensary and Cultivation Center in Baltimore, Maryland.

Pitching a Cannabis comedy to be distributed by a major studio with A list talent.
Pitching a 100 acre CBD farm with proper permits,licenses,greenhouses approved in Colorado

Pitching an easy way for patients to meet with doctors who understand the benefits of medical cannabis to get their medical cards in a clean, safe environment.

Pitching a home party business for CBD products to help the 100 million people in pain who wish to use natural products to help rather then opiates and other pharmaceuticals. The products are legal in all 50 states.

Pitching a unique advertising solution for the cannabis industry so that the videos are seen in dispensaries, doctor offices, and festivals. Ads and videos can be seen on all screens using streaming technology.

A cannabis consultant pitching to get investment in a dispensary in Oahu. 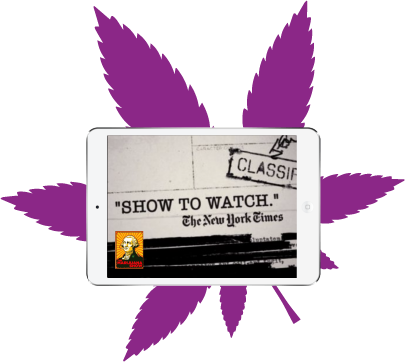 Get The 1st Episode For FREE Right Now

All You Need to Know About MARIJUANA and ARTHRITIS
HOW TO STOP PTSD and ANXIETY
The Women Behind Amazon Prime’s ‘The Marijuana Show’ Are Serial Ganjapreneurs
YOGA, MEDITATION and CANNABIS – OH YEAH!

get the latest news & Get Episode 1 of Season 3 free

the cannabis industry is approaching a tipping point. Be there with us when things change for the better, as we all help the industry grow.

Plus WATCH 1 FREE EPISODE TODAY - newsletter with no strings