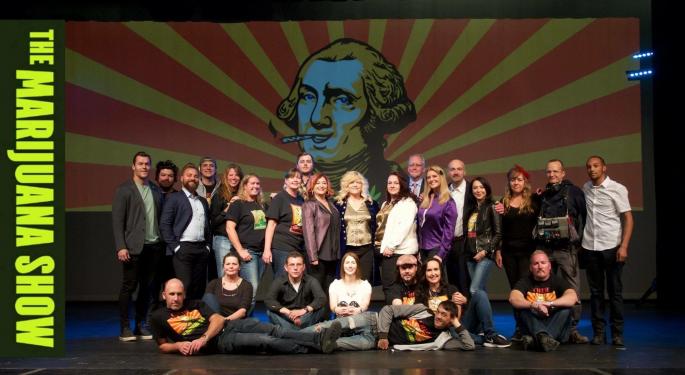 Wendy Robbins and Karen Paull are the co-creators of “The Marijuana Show,” a popular series on its third season that can be streamed on Amazon.com, Inc. AMZN 4.23%’s Prime Video — and a fourth season is in the works.

“The Marijuana Show” is often referred to as the cannabis industry’s “Shark Tank,” with a group of contestants seeking funding for new products and services in the marijuana industry.

Over three seasons, the show has offered over $20 million in funding to successful entrepreneurs, according to Robbins and Paull, who co-host and co-produce the show.

The two are much more than the women behind one of the most successful reality TV projects centered around cananbis. Benzinga recently spoke with Karen and Wendy about “The Marijuana Show”; their latest project, the “Legalize It” documentary; and their new hemp product line, Club Hemp.

Careers Before ‘The Marijuana Show’

Robbins and Paull have been included in Cannabis Business Executive’s Top 50 Most Important Women in the Cannabis Industry.

Prior to launching “The Marijuana Show,” Robbins attended The Juilliard School, co-starred in “Homemade Millionaire” with Kelly Ripa on Discovery Communications DISCA 8.56%’s TLC and mentored inventors to pitch products on HSN. She co-invented The Tingler head massager and wrote the bestselling book “Why Marry A Millionaire? Just Be One!”

Paull holds a bachelor of fine arts in acting from the University of California, Santa Barbara and a master of fine arts in acting from San Francisco State University and a bachelor of arts in sociology from UCSB. She was vice president of sales at the online photo service Snapfish and part of the executive team when the company was acquired by HP Inc HPQ 3.83% in 2005.

Robbins and Paull have their own stories about how they became involved with cannabis. Robbins left home when she was 14 and sold weed to earn money.

“Funny enough, I didn’t use the product because money was what I needed,” she said.

“Friends were dying of cancer and the more I researched, the more I realized that cannabis and CBD oil was saving lives.”

Robbins used her skills as a director, writer and producer to start making documentaries to promote cannabis. Now she uses the drug to “relax, laugh, to expand consciousness, to be playful.”

Paull’s first interaction with pot was in college. “I found cannabis to be the most natural anti-anxiety and relaxation fit for me,” she said.

Aside from their production projects, Robbins and Paull are entrepreneurs who co-founded Club Hemp with two contestants from the third season of “The Marijuana Show,” hemp farmer Luke Johnson and CBD/formulation expert Heather Lawrence. Club Hemp started as a joint venture between Robbins and Paull’s Tingle Global Media, Luke’s Cloud Co. and Heather’s Restore Skin Balance.

Club Hemp recently launched a line of CBD-based products for both people and pets, with Robbins and Paull developing the branding and graphics for the line.

“There are hundreds of companies cropping up, yet we feel we have the competitive advantage, with access to thousands of deals through our show,” she said. “We are able to handpick the best of the crop. In my opinion, we have the next Procter & Gamble Co PG 1.87% for the cannabis industry.”

Why A Legalization Documentary?

Robbins and Paull are firm believers that marijuana has to be legal on a federal level in the U.S. so anyone who needs it can access it easily.

“While cannabis is legal in some states, you can’t cross state lines without the threat of being arrested or fined. We want to encourage our politicians to legalize it on a federal level and deschedule or reschedule it from a Schedule 1 drug, because a patient should have the right to cannabis along with the freedom to travel with it,” Paull said.

The two said they hope their movie will have an impact on politicians with the ability to change marijuana policy.

The filmmakers intend to screen the film in Washington, D.C. so politicians understand the medical benefits of cannabis and the futility of the drug war, Robbins said, adding that it affects minorities 7-to-1 over white people.

“Lives are destroyed for a plant,” she said.

“Legalize It” shares the stories of people who need cannabis because they are fighting cancer or other diseases for which the drug is used. The film depicts the struggle to access cannabis, which “has become a human rights issue,” Paull said.

Robbins said: “Cannabis caused zero deaths. It’s time to legalize it. This 30-minute film shares emotional curated conversations with moms, professional athletes, vets and former prohibitionists-turned-advocates to cause a dialogue and a vote to legalize.”

The two are touring the country with the documentary and working on another while on the road.

“Our films are always about ending the stigma, stopping the futile war on drugs, the misinformation and lies to tell the truth; through integrity, we intend to save lives one story at a time,” Robbins said.