This 11 year old stood for the first time in 4 years. Amazing! 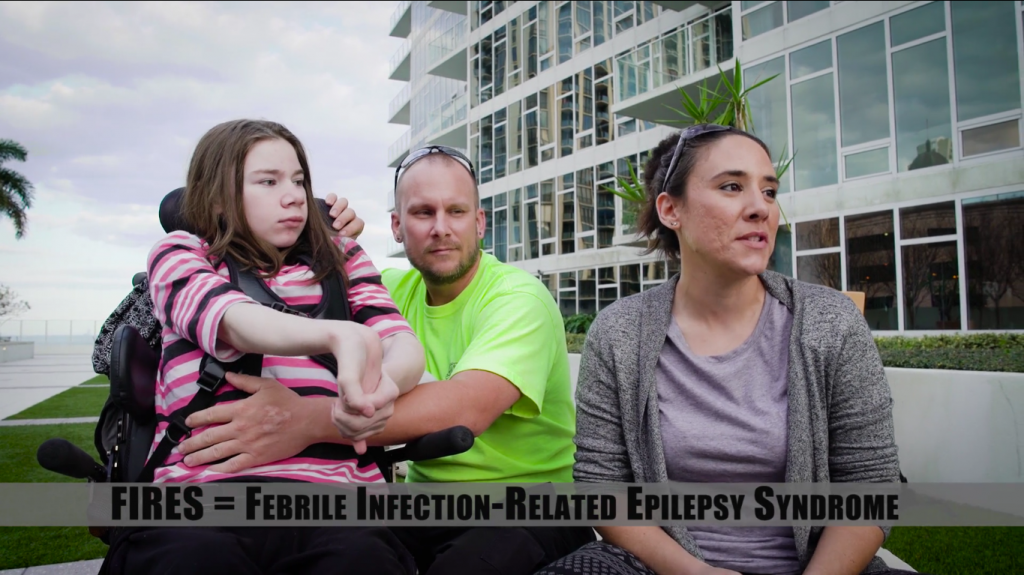 – Alexis was seven and a half when FIRES hit. She was a previous normal, healthy child, walking around, talking, going to school. She had a fever for a couple of days, and dad thought he heard something in the middle of the night and went and checked on her, and we found her having her first seizure. She was put in a medically induced coma for four and a half months. Your body shouldn’t be sleeping for that long. And then when she came out, not the same kid. And she continues to seize. She has permanent brain damage now, and I know that a lot of it is from how long she was in a coma for. And the drugs, I mean, that’s just poison. It’s just poison like constantly in you at all times. She’s been on some pretty nasty, disgusting stuff. I think she’s tried almost everything out there. Right now she’s on seven, including a specialized diet that she’s on.

It’s been just a constant, for the last three years, just a constant trying to get these meds out of her. Just trying to get just a little bit at a time, just lower it, lower it, lower it, because every time that we do, it’s like a new kid. A little piece of her comes back. Every time that we take a little bit of those drugs away from her, she does amazing. When she left the hospital, she couldn’t even hold her head up. Like, we literally had to stop while we were walking her in her wheelchair and fix her head for fear that it was just gonna snap. And now, I mean, she’s got some serious arm strength. I didn’t know that Alexis did understand what was going on around her until her dad and I were sitting on the couch one day, and I was telling him a pretty complicated, sad story. I mean, it was sad. Anybody that heard it would have cried. And, I looked over at her. This was before she was saying anything. I looked over at her and she was crying.

And that’s when I knew that she completely understood what was going on, and I’m so grateful that that situation happened, because I don’t know if we would’ve realized that she’s trapped in there.

– [Voiceover] So she’s trapped inside her body, is basically what it is. And she’s trapped on drugs, pharmaceuticals, that are killing her brain.

– [Voiceover] And killing her motor skills.

– But maybe if she wasn’t on so much medication, and she did have the CBD oil, it would be a little easier. I believe that it would make our life a lot easier.

– If it were legal, I definitely would be giving Alexis medical marijuana, CBD, whatever we could get our hands on. I mean, whatever to help her. I mean, it’s natural. It’s so much better than this garbage that she has to be on. I just wish that it wasn’t so… hard to get something that’s just so natural. It’s not fair. It’s just, it’s not fair.

– She’s so amazing. She just needs to be back and have control. You don’t know until you live this life. Until you are trapped in your own body, or you’re watching your daughter trapped. When she is in there and trying so hard to get out. You don’t know. You don’t know the pain and the misery that she has got to be in. I can tell. I mean, she has awesome days. She’s having a pretty good day right now, but there’s days that she’s miserable, and we’re miserable, and it’s not fair. It wouldn’t harm anybody else. Awesome, Lex! Wow!